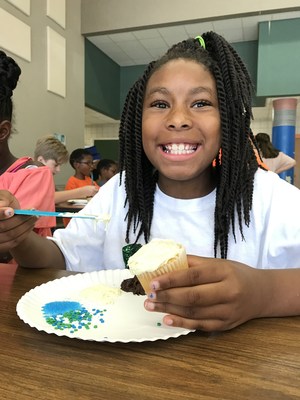 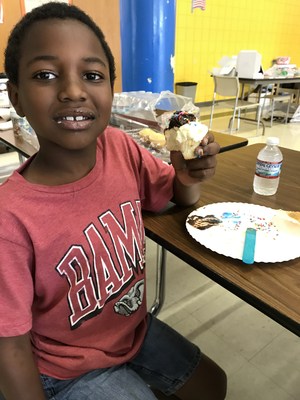 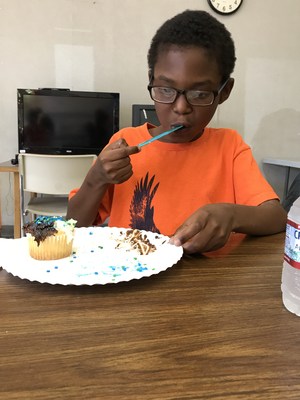 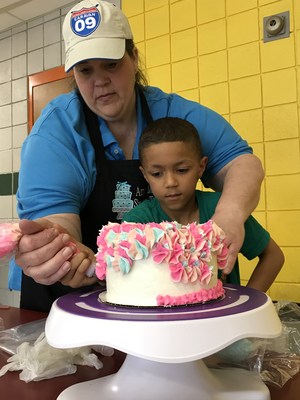 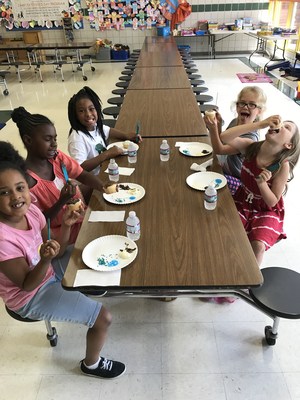 It’s a Friday morning in June at Julian Harris Elementary School, but there are still almost 90 children at the school. Julian Harris is the home to Decatur City Schools Extended Day Camp, so it stays busy year-round.

“Make us an emoji,” a camper calls out from the patterned rug he’s sitting on cross-legged.

This Friday at Extended Day Camp is special because Amy McBride Shelton from Amy Mac’s Sweet Tooth bakery is giving a presentation on how to decorate cakes.

“But what kind of emoji?” Amy asks.

Instead of the same boy answering, a girl near the back of the rug raises her hand instead. “The heart eyes one.”

Amy laughs a little, but she tries anyway. Is it even possible to make heart eyes out of icing? A miniature clown, a petite rose, and tiny flowers made of fondant line the top of her cake already, so the students think she can make anything.

On their very first day of camp, Extended Day campers made toilet paper roll binoculars in honor of the camping-themed week. During other weeks, they built paper plate dragons, Mexican totem poles, monkey door hangers, silly dough, invisible ink, and bird puppets. So how hard can it be to make heart eyes?

During the cake decorating demonstration, a boy’s father arrives to pick him up and the boy begs to stay. “But Daddy, she’s making a heart eyes emoji!”

To be honest, it isn’t just Amy making heart eyes at Extended Day Camp. We’re all loving the amazing program that Elissa Taylor and Carol Shaw put on every day.

During the summer, campers go on three field trips every week. They regularly rotate through bowling, skating, and visits with a local magician, but they also include trips to the Birmingham Zoo, Burritt on the Mountain, Wheeler Wildlife Refuge, and the Huntsville Botanical Gardens.

On days when no field trip is planned, campers participate in game days when they play tournaments of minute-to-win-it, or celebrate the much-anticipated “cup stacking day.”

By the time Amy is done with the emoji, it’s time for each student to take a turn at icing the cake, and it turn out that it might be a little harder than it looks.

One by one, campers try their hands at squeezing the piping bags, and they leave with bits of frosting on their hands, licking it off as they return to their seats.

But the bits of icing clinging to them are just the appetizers, because as soon as the session is over, campers can decorate their very own cupcakes.

By the time these campers go home sugared up (one carrying the cake Amy decorated), they’re ready for another big day at Extended Day Camp.

And it likely will be a big day. Many of the other activities at camp include scavenger hunts, nose dives, stinky chemistry experiments, something called “swamp water,” and somehow managing to defy gravity.

And if that doesn’t sound like enough drama, Tuesdays are music and drama days, devoted to . . . well . . . more drama, I guess.

Because it’s only somewhere like Extended Day Camp we can find that much drama within four walls, heart eyes on top of the cake, and somehow heart eyes of our own.